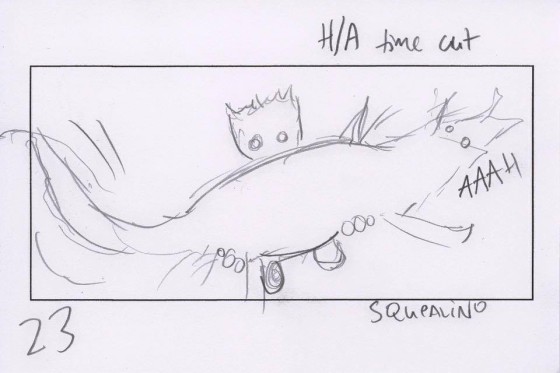 Recently I mentioned how I draw every single shot in Guardians of the Galaxy Vol. 2 before we ever shoot a frame. I’ll spread whole scenes over my office floor or all around the walls, sometimes hundreds of shots, and it will give me an idea of how the scene flows, what’s smooth, what’s jumbled, and even what works comedically. Over the entire film I draw thousands of these thumbnails.

Many of them are messy and it’s impossible for anyone other than me to tell what they are. Some of them get turned over to accomplished storyboard artists to flesh out. Some of them go directly to our pre-visualization team to turn into animated storyboards. And others just stay in their primitive state.

Many of you asked to see these drawings so I thought I’d start posting thumbnails of whatever it was we shot that day on #GotGVol2. I’m not going to explain what the shot is – as I said, they’re messy. But maybe you can match the thumbnail to the shot when the movie is released.

So here’s the first in the series of #WhatWeShotWednesday (that is, today). Can you guess what it might be?